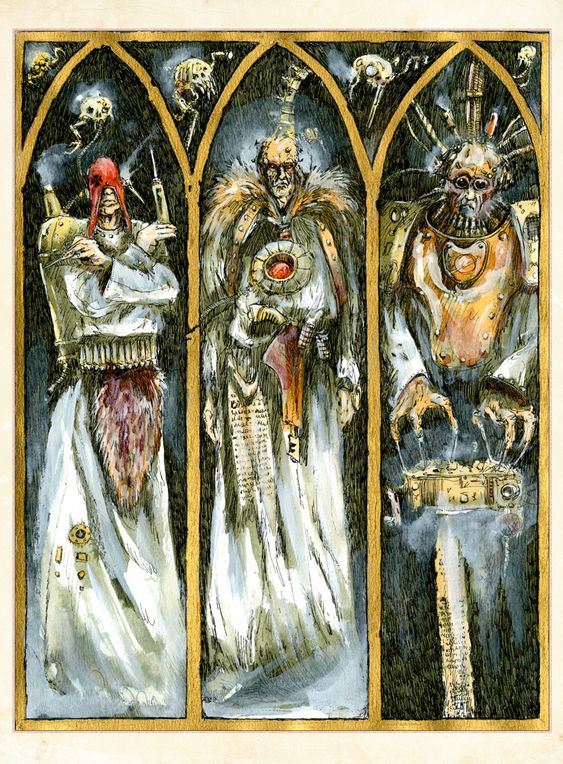 Rivals at the system:
Merchant charter captain Ingram
–Believes that his star vessel, transporter “Stepping Stone of Saints” has become cursed after offering a flight to Judge Mordechai and his retinue “Ungues Aquilarum”.

Cardinal Humer, Avaritas, Penitus Balteus
-Annoyed for sacriledge of arbitrator Mordechai for acting as judge and operating precinct-fortress without blessing of the ecclesiarchy.
-Annoyed for arbitrator Mordechai from supporting activities of Brother-militant Makbae and Missio Galaxia versus Armormant doctrine.
-Has ceased covert hostile actions until common threat of Confederation of Light is solved.

Alpha level psyker Jotak, Collegio Magnitudo, Semis
-Boy from the slums of Bastion of Saint Drusus to whom Imperial citizenship was promised and who now atrophies at the hexagrammic suppression cell of Collegio Magnitudo at the hands of Headmaster Idiomus.

Headmaster Idiomias, Collegio Magnitudo, Semis
–As Jotak, one of the psykers predicted by Valquon Sark is at the hands of Aurora Orlov’s minion Judge mordechai sets highest priority to prevent the headmaster Idiomus from gathering any other Star-children.

Prison Warden Vladir
-Judge Mordechai has founded arcology to Nothus 820.M41 competing for same resources that are PC-5728’s main income. By diverting large sums of tax funds and use of Imperial authority to Dolabra Imperator judge Mordechai has enabled arcology to gain better equipment and professional crew that Vladir is not able to keep up with.

Void Union
-By dumping large number of refugee miners at 820.M41 to Sphaera Imperator Judge Mordechai has caused wages of Void Union miners to drop. To push back Void Union’s Straw Men, who control the distribution of equipment and mining quotas, give most dangerous jobs along faultiest tools  for refugee miners and death tolls are high among refugee miners.