Origin: Battlefleet
You were born to a life aboard ship. Nothing stirs your blood more than sailing the void or facing pirate ships with gun batteries locked. Yours is a tradition of bravery, honour,
sacrifice, and adventure. The void is where you truly feel alive.
You have grown up within the confines of the Battlefleet and as such you are confident, arrogant, loud, and brash—with the skills to back it up. You see yourself as born leader and commander, and a Rogue Trader’s ship offers both a desired challenge and a chance to write your legacy amongst the stars.

Savant
To the scholar’s ear, there is no worse sound than the tearing of parchment. It always marks a desecration of one sort or another, be it a priceless work lost or a savant destroying his own fladwed labours in disgust. You know this because the murmuring of savants, clicking of lexmachinery, and scent of ink and dust have been a part of your life for as long as you can recall. Apprentices are brought young into the Adept’s trade, for there is much to learn and the human span holds little time to learn it in. Apprentices sit in attendance at meeting after meeting between elder savants, bathed in the exchange of knowledge until they know how to learn and the correct knowledge has been drilled into them. All the galaxy is packed with knowledge, and even the smallest drop of it would fill the minds of a world of savants to bursting. Yet you derive much comfort from learning—even though you could never personally know more than a miniscule fraction of all there is to know.

New Horizon: Xeno-Arcanist
Academic scholarship has long been your fervent pursuit. You seek to study the dreaded xenos and their works throughout the galaxy. However, you walk a thin line as you have
learned that those who possess knowledge of the alien are persecuted—some are even executed or taken away by the Holy Inquisition. This is a fate you try very hard to avoid. You know that there are several groups out there, including Rogue Traders, who highly prize those who possess knowledge of the xenos that they deal with. You may have amassed you own small library (hidden, of course), or perhaps you have a mysterious patron who sends you information from time to time. You dream of the day when your knowledge can be used to aid humanity.

High Vendetta
Honour, friendship, and loyalty are not mere empty words or worthy ideals to you, they are tools for survival. Without your ship, your crewmates, and your allies, you are alone in the cold darkness of space and prey to enemies and rivals without number; with them, you are protected, you have a home and backup when others seek your life. This knowledge was brought home to you when you and your allies were caught up in a deadly vendetta with another faction, a murderous feud that consumed your life and sent friends to their graves. Whether your enemies were a rival crew, noble house, cult,
cartel, or outlaw gang, blood was spilled and vengeance taken. Regardless of whether your side was victorious, or was left tasting bitter defeat in the end, what matters was that you fought and would to so again.

Fear: Tormented by the Unspeakable
There is something out there, a nightmare given substance that you may have glimpsed for only a moment, its horror, if not its visage, burned forever onto your mind. That it is
coming is enough to drive you to desperation, whether or not it is coming for you, because you know, deep down, that when it arrives, it will spell doom for everyone. You have borne witness to one of the unspeakable horrors of the universe, an entity or presence so awful that you will attempt anything to escape it, though no escape seems possible. This vision was so dreadful that the things which terrify lesser men hold no fear
for you, so tame are they by comparison.

The Last Child
Your family is not merely disgraced, it is dead. You alone are the sole survivor of a once-proud lineage that fell into disrepute and paid the ultimate price for it. Whether they
made the wrong enemies, were on the wrong world at the wrong time as war or rebellion took hold, or faced some other fate, they are gone and you are all that remains, the last heir and the only one who can ensure that your family continues or, at the very least, dies with pride. You will need all your wits and cunning to ensure the survival of your clan, as your once vast resources are now next to nothing.

Officer on Deck: All Battlefleet origin characters gain a +5 bonus to all Command Tests while aboard any spacecraft.

Void-Born Ancestry: Members of the battlefleets are closely-related to the Void Born

Void Accustomed: Due to their strange and unnatural childhood, the void born are used to the vagaries of changing gravity. They are immune to space travel sickness. In addition, zero- or low-gravity environments are not considered Difficult Terrain for void born characters.

Ship-Bound Fighter: Living and training on a spacecraft is vastly different than living and training on the ground. Because of the close-in nature of ships, Battlefleet characters are unaccustomed to fighting in open spaces or on the “dirtside” of planets. While they are on a planet they suffer a –2 penalty to Initiative Tests and double the Ballistic Skill penalty for firing weapons at Long Range or greater. These penalties don’t apply to
the character if they are inside a tunnel or other confined space. 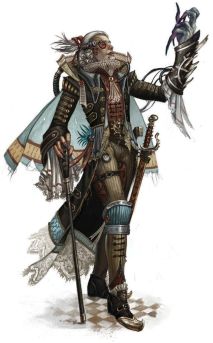 -Captain has her left arm twisted after touching alien crystal.  She usually keeps her deformed hand under the cape but will raise it if necessary. Sight of deformed hand causes revulsion.

-Harbours a vengeance against Chorda dynasty.

-Late success has brought her from poverty to resources that enable her to challenge the Chorda dynasty in the system of Ultima Tectum.

-Ancient navigator Adspectus is on his last voyage and on verge of insanity.

-Tech priest Genetor Sur-Uris  obsessed with study of xenos biology in her retinue. He is tainted by xenophilia.

-Captain has ambition to raid Stryxis-Chorda drug shipment and escape from the system.