Holiest day of the Imperial Calender. It is common across the Imperium that different temples and sects arrange great processions and corteges to hallow the day. When different groups converge during the day their meeting have variable results. Sometimes two converging groups greet each other with blissful testaments of faith, sometime conflict arises and accusations of heresy and apostasy escalate to bloody riots. Nobility also has accustomed to arranging great parties with excessive service and entangling intrigue.

Pilgrims gather to place where mortal part of Divine God-Emperor made sacrifice for the greatness of the Imperium.??

Eponalia is celebrated in honour of Saint Epona

Her heraldric banner depicts a horsewoman killing a serpent-tailed (“anguiforme”) daemon, in which she established a theme of victory over daemons.

Commander Epona’s sovereign role evolved into a protector of Imperial guard. The cult of Commander/Saint Epona was spread over of the Imperium by the cybernetic cavalry, initiated by the Tupelov lancers or cyber-equites singulares augustii recruited from The Old Hundred.

Opalia: a festival honoring the founding of Adeptas Sororitas.

Sanguinalis: Primarch Sanguinious is very important in the Imperial Cult, and is the most revered icon other than the Emperor himself. The other primarchs do not reach this level of adoration. There already are other angel like entities such as the Living Saints, but Sanguinious is held above them all, so  they certainly revere him as the greatest of the Emperor’s sons.

Anniversary of foundation of the Palace of the Emperor.

The last day of Imperalia and the holiest days of pilgrimate routes accross Terra. Marks a date of Astronomicon reaching full power and lighting up the galaxy. Commemoration journey ends at the outer gates of the palace of the god-engine. Ecclesiarchy (Sect ?) celebrates this as a day when warpstorms that caused Age of Strife abated and a new powerful leader called the Emperor of Mankind emerged.

-Marks the end of the year.

Song sung during Candlemass: “Holy Triumph of the Golden Throne”

Life on Terra, during pre-imperial antiquity, centered on the military, agriculture, and industry. The short, cold days of winter would halt most forms of work. Brumalia was a festival celebrated during this dark, interludal period. It was pre-Imperial in character and associated with crops, of which seeds are sown in the ground before sprouting.

People would sacrifice cattle to a deity erased from the historical records. Vine-growers would sacrifice ptera-squirrels in honor of It—for the ptera-squirrel is an enemy of the vine; and they would skin them, fill the skin-bags with air and jump on them. Civic officials would bring offerings of firstfruits (including wine, olive oil, grain, and honey) to the priests.

Although Brumalia was still celebrated as late as the 36th millenia, it was uncommon and celebrants were ostracized by the Ecclesiarhy (Sect: Temple of the Saviour-God). However, some practices did persist as scattered traditions

In later times, Nobility of the Imperium would greet each other with words of blessing at night, “Vivet in adventu anno”, “Live for a coming year”.

In the archaic Roman calendar, February was the last month of the year. The name derives from februa, “the means of purification, expiatory offerings.” It marked a turn of season, with February 5 the official first day of spring bringing the renewal of agricultural activities after winter.[10]

In the old Roman calendar (until perhaps as late as 153 BC), the mensis Martius (“Mars’ Month”) was the first month of the year. It is one of the few months to be named for a god, Mars, whose festivals dominate the month. 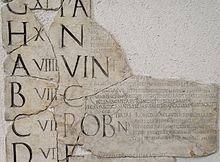 Piece of the fragmentary Fasti Praenestini for April, showing the Vinalia (VIN) and Robigalia (ROB)

A major feriae conceptivae in April was the Latin Festival.

Scullard places the Taurian Games on June 25–26,[12] but other scholars doubt these ludi had a fixed date or recurred on a regular basis.[13]

Until renamed for Julius Caesar, this month was called Quinctilis or Quintilis, originally the fifth month (quint-) when the year began in March. From this point in the calendar forward, the months had numerical designations.

Until renamed for Augustus Caesar, this month was called Sextilis, originally the sixth month (sext-) when the year began in March. 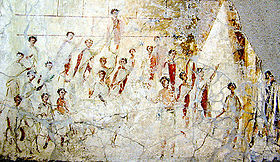 The following “moveable feasts” are listed roughly in chronological order.

The Rosalia or “Festival of Roses” also had no fixed date, but was technically not one of the feriae conceptivae with a date announced by public priests based on archaic practice.

Festivals were also held in ancient Rome in response to particular events, or for a particular purpose such as to propitiate or show gratitude toward the gods. For example, Livy reports that following the Roman destruction of Alba Longa in the 7th century BC, and the removal of the Alban populace to Rome, it was reported to have rained stones on the Mons Albanus. A Roman deputation was sent to investigate the report, and a further shower of stones was witnessed. The Romans took this to be a sign of the displeasure of the Alban gods, the worship of whom had been abandoned with the evacuation of Alba Longa. Livy goes on to say that the Romans instituted a public festival of nine days, at the instigation either of a ‘heavenly voice’ heard on the Mons Albanus, or of the haruspices. Livy also says that it became the longstanding practice in Rome that whenever a shower of stones was reported, a festival of nine days would be ordered in response.[22]

Another irregular festival of note is the Secular Games. Over the course of several days there were sacrifices, entertainers, and games hosted by the state, attempting to be the greatest display anyone living had ever seen. These games were intended to be held every 100 years with the purpose of it occurring only once in any individuals lifetime. At one point two cycles of the Secular Games were being held simultaneously, leading there to be people who would in fact witness it twice in their life.

The noun mercatus (plural mercatūs) means “commerce” or “the market” generally, but it also refers to fairs or markets held immediately after certain ludi. Cicero said[23] that Numa Pompilius, the semi-legendary second king of Rome, established mercatus in conjunction with religious festivals to facilitate trade, since people had already gathered in great numbers. In early times, these mercatus may have played a role in wholesale trade, but as commerce in Rome became more sophisticated, by the late Republic they seem to have become retail fairs specialized for the holiday market. The Sigillaria attached to the Saturnalia may have been a mercatus in this sense. Surviving fasti[24] record Mercatus Apollinares, July 14–19; Mercatus Romani, September 20–23; and Mercatus Plebeii, November 18–20. Others may have existed. The English word “fair” derives from Latin feria.[25]

By the outset of the nineteenth century and particularly in response to the carnage of the latter years of the French revolution, the term Roman holiday had taken on sinister aspects, implying an event that occasions enjoyment or profit at the expense, or derived from the suffering, of others, as in this passage from Childe Harold’s Pilgrimage (1812–18) by George Gordon, Lord Byron:

There were his young barbarians all at play,
There was their Dacian mother—he their sire,
Butchered to make a Roman holiday.”[26]

More benignly, the phrase was used as the title of a romantic movie set in Rome, Roman Holiday.