Habitable planet with anomaly atmosphere infested by programmed alien nanocrystals and techno-barbarians from the repressed past of Terra. 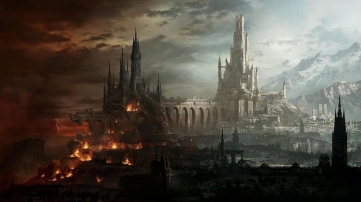 -Pilgrim site of Tech-Priests of the EF-118.
-As Angels used mass manipulation fields and nanotechnology to create weapons to fight each other, the ground is fused with masses of half formed and fractured mechadendrites, optic cables, cogitator units, energy storages and tech traps. -Dilapidated mechadendrites of small to gargantuan size “growing” from and around surface of the planet.
-Forests of tangled masses of mechadendrites strangling each other.

Labyrinth of the Great Mask

Incubated from carefully sampled and engineered genetic material.
Each member of their lineage is Blank. Originally they were developed by ANGEL 1 to become it’s servants as their psychic null effect protected the AI from distortion of code caused by thinning of the veil of warp.
As ANGEL 1 and ANGEL 2 were fighting over the control of the throne of cruiser the ANGEL 1 created ancestors of the masked tribes as an autonomous stealth saboteurs who could penetrate defenses of Skulking city and destroy ANGEL 2.
Even when ANGEL 2 was able to destroy it’s rival it could not detect or stop infiltrators of blank humans and they successfully destroy datavault containing core programming of ANGEL 2.
None of the first infiltrators of Tactical assault squad-1 return but half of the troops had remained in reserve as Tactical assault squad-2, if initial attack fails. As centuries march forward the masked tribes evolve along the other autonomous units left over after the fall of ANGELs.
They are still led by cyborg mechanism responsible on training their people to be effective AI saboteurs when ANGEL 1 needs them again.

They still rigorously train for infiltration and sabotage behind enemy lines and their courage,  dedication and resilience

They are also sterile and cannot continue as society without use of incubation halls and genetic engineering facility.

There is no gender difference in names of the tribe. Each one is named by letter of Greek alphabet and number, IE Gamma-18 or Epsilon -1.

To be acknowledged as adult and worthy of receiving baby from incubation halls one must slay silica saurus in single combat. From the slayed frame of silica saurus the hunter removes it sensory mechanisms and facial armor to create the mask of hunter for personal use. Mask of hunter enables summoning and riding the same type of silicasaurus as the mask they wear.

To be able to build your own Dorkey (domesticated silica saurus, dog/turkey analoque)  to help you scout gives right for leading the hunt. If there is competition between possible hunt leader, their Dorkeys fight duel while other members of tribe bet on outcome in celebratory fashion.

To become worthy of fusion with the great mask contestant for leadership must be acknowledged hunt leader and lead hunt that is able to slay one of the Devourer’s swarming around the Skulking city.

-White code generator field keeps the Devourer’s and the Skulking city away.
-Portable white code generators (heavy weapon) are used for hunting silica saurian.
-Members of the masked tribe use silica saurus masks and their tachyon sensors to see through the Haze of Nanocrystals
-Silica saurus cogitator talisman to mask as silica saurus.
-Cultural ability to turn any imperial or archaotech battery or power generatorto potent explosive.

Haze of Nanocrystals
-Programmed self-replicating crystals
-Planted by warp wise xenos race native to system in the peak of their culture.
-Protect planet from solar storms and divide suns energy evenly to atmosphere of non-rotating planet.
-Cause all sensor equipment to fail drastically, except tachyon emitter based sensors developed by silica saurian evolution.

ANGEL
–ANcillary Guardian of Environment and Life
-Pair of artificial intelligence’s developed by Hegemony of Terra during golden age of technology.
-Their calculation power made warp travel possible before rise of Navigators.
-AI pair’s ability to program each other and vulnerability to psychic residue of human minds made them twisted shadows of their original programming.

ANGELs 1 and 2 in their hubris fought in heaven for control of the throne and were banished to surface of Gravis Minor.

Humans were recruited&hatched by loosing ANGEL and his human servants were able to destroy angel controlling the throne of ANGELs at the Skulking city.

“When I was around 10 years old I heard from the public radio an audio drama “Earthsearch” that game me nightmares. Too hectic kid to be around radio once a week at same time, I missed part of the episodes and I had to imagine what happened between. Part of this campaign is based on terrors and ideas raised by this memorable experience.”

During battle of dominance ANGEL 1 and ANGEL 2 launches all possible weapons of dark age of technology to each other. As battle was fought also on vox, sending scrapcode to air part of the units had to be completely autonomous in fight against enemy and for resources. Even after both AIs had collapsed their autonomous units kept on adjusting and developed systems of co-dependence.

-Pair of pincers with ability to collect charged nanocrystals from air or drain energy directly from  power source.
-Parasitizes mainly megalobots and carnimatons but looks after any power source to drain.

Original purpose: Siege engine
-Grows from small to gargantuan
-Burrow to ground in search of raw materials
-Powered by fusion reactor, resurface when overheating.
-Provider of raw material deposits in machine ecosystem.
-Plasma launcher from plasma pistol to plasma macrobattery demending of the size of the megalobot.

Weapon: From plasma pistol to plasma broadside battery depending of size of megalobot.

Veins of ANGELs
-As Angels used mass manipulation fields and nanotechnology to create weapons to fight each other the ground is fused with masses of half formed and fractured mechadendrites, optic cables, cogitator units, energy storages and tech traps. -Dilapidated mechadendrites of small to gargantuan size “growing” from and around surface of the planet.
-Forests of tangled masses of mechadendrites strangling each other.

ANGELs fought in heaven and were banished to surface of Gravis minor.
Genetically altered humans were incubated by loosing ANGEL and his human servants were able to damage ANGEL controlling star cruiser. As cruiser fell to the surface of planet it was transformed to autonomous fortress known as the Skulking city.

Engine core,
-Gives energy for the servitor.
-Engine cores are fueled with disintegration of power cells.

Hydraulics,
-Gives motion to the frame of the servitor

Cybernetic link (MIU),
-connects brain to cogitator
-Frame size does not affect size of the cogitator.

Cogitator interlink
-Cogitator controlling the construct without human brain or Central neural cortex controlling it is apostasy from the age of strife.
-Works as brain booster of the servitor connected to it.

Code inhibitor
-If construct does not have human brain integrated it is called automaton.
-Each Imperial Central neural cortex is instituted with code inhibitor.
-Code inhibitor makes automaton non-autonomous and actions depend on command wafers inserted by controller of automaton.

Domination array
-Enables the construct to remotely control other constructs.

Transmitter,
-to communicate with other constructs and administrators.

Data chest,
-Acts as memory bank for the data collected by the construct.

Weapon depends on frame size
Small: From Digital up to pistol
Medium: Up to rifle
Huge: Up to heavy
Enormous: Siege weapons
Gargantuan: Lance weapons